Thanks for hopping over from Sunshine Scribbles and welcome to my post for the Keep Britain Breastfeeding Scavenger Hunt Day 5 Extended Breastfeeding we have over £700 worth of breastfeeding and baby goodies up for grabs including prizes from More4Mums providing a set of ‘Hot Milk’ Lingerie, a signed hardback limited edition copy of Milky Moments and a £30 voucher from MilkChic  Full details of the Grand Prize can be found here and all entries to be completed via the Rafflecopter at the bottom of this post.

Past knowing that I wanted to, I didn’t have a roadmap for breastfeeding. I had no clue about timescales and I have had to learn as my daughter has grown.

I decided very early on that I wanted to make it to a year. After the initial months, I was lucky to find breastfeeding easy, so I really didn’t want to have to use formula as it seemed to me a second-best option both nutritionally and financially.

In fact, when small one was tiny, I was sure that I would breastfeed until she was a year and then wean. I understood that there were still benefits to breastmilk, but couldn’t see why you wouldn’t express and give a child breastmilk in a cup.

Live and learn… I’ve never managed to express more than a few ounces and the idea of carrying around bottles and pumps seems incredibly impractical compared to the convenience of breastfeeding. Let’s face it, most mums who continue to breastfeed find their peace with breastfeeding in public, but you won’t find many pumping in front of their partners, let alone in a crowded cafe!

I was very proud to make it to a year, although sometimes it felt like I was the only mum in the world still breastfeeding. At our NCT group’s 1st birthday meet-up there were 2 out of 8 of us left breastfeeding. Actually, that’s pretty good going – in the UK, you are in the minority if you breastfeed past 6 months and I certainly felt that way at times.

The 12 month target had become a huge focus for me and I didn’t really question the idea that we would start weaning at that point. It was logical – small one enjoyed drinking cow’s milk from a cup like a big girl and it seemed the obvious transition to make.

I hadn’t a clue how difficult weaning could be. Small one liked her mummy milk and she certainly wasn’t going to give it up without a fight. Cup milk was all very well for novelty and convenience, but it didn’t compete with the real thing.

Unlike night weaning, which had benefits for both of us, daytime weaning just felt like a pointless fight. I spent hours feeling miserable trying to persuade her she might prefer milk in a cup, or fighting sleep as I tried to persuade her to sleep without a feed. It always ended with us both feeling drained and emotional and me guiltily feeding her. Breastfeeding, as always, healed the rift and left us both feeling snuggled and secure.

I was still off work with a back problem so there was no pressing reason to wean, but I continued to half-heartedly encourage her because I felt it was expected.

We had slowly cut down to 3 feeds a day when she developed a chest infection. I was horrified as she had never really been ill before and I felt awful, blaming myself for reducing her immunity. She wasn’t eating and I spent 2 days sitting on the sofa feeding her whenever she asked.

Suddenly, at 15 months, she was feeding as regularly as she ever had, and I had lost the will to wean. I started reading up on longer term breastfeeding and it struck a chord. While I never offered milk, I stopped trying to distract her or worrying about what I “should” be doing. 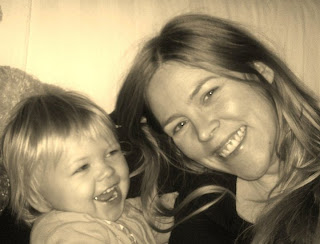 As the small one has become more communicative, our breastfeeding relationship has changed. She tells me when she wants mummy milk and when cup milk is OK and, over the last few months, she has self-weaned from all but her night-time feed. Breastfeeding has become more special because it’s no longer a necessity – it’s something we make time for because it’s important to both of us. When the small one pulls me away from something and insists she needs milk in daylight hours, what she means is that she needs my attention. Breastfeeding gives her my undivided attention and an opportunity to reconnect even in the busiest day.

These days, she both frustrates and amuses me in equal parts, loudly informing our neighbour, “MUMMY NIGHT MILK” as she pokes my boobs or telling me that “this one is done” when she wants to swap sides.

I do occasionally get a funny look from friends when they realise I am still breastfeeding, but the small one is so self confident and independent that they struggle to argue against it.

Small one will be 2 soon. If I’m honest, I do hope she weans in the next year, if only because I would prefer her to have different coping methods by the time she starts school and I want her to have time to adjust. Having said that, I am only too aware that I might change my mind, and I won’t be pushing her to wean before she’s ready. This time, I will be able to explain to her why it is time to stop and it will be a decision we make together.
For more extended breastfeeding experiences please hop on over Fit for Parenting where you can gain further entries into the grand prize draw. Full terms and conditions can be found on the Keeping Britain Breastfeeding website. UK residents only.